Well, it took over a month but I believe you'll find it was worth it:

The Best Of! Chess Blogging Part II: From the Valley of Despair to the Mountaintop of Blogging Greatness!

Part I, on Openings was here.

In Part II we let the bloggers choose some of their own best posts, generally. A few of the Giants have not nominated themselves so I might have to go out and track some more items down. But below is enough to keep you reading and contemplating for a good long time.
_____________ 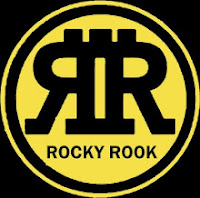 Rocky is a good man and a smart technical guy--if you play on the Free Internet Chess Server like he and I do you are being gifted with Configuring Babachess to Look Like Fritz and some Babachess backgrounds (very classy). His most viewed post, he says, is a J.K. Rowling quote on failure. In the business, we call that "traffic bait." But he considers his "Legacy contribution to the chess world" to be his Logical Chess: Move by Move by Irving Chernev (be sure to open the link in this post and see what's in the .pgn file). Finally, just for fun a Lev Aronian lookalike.


Roman-Chess aka Chessblogger--some more interesting tech, Chess database formats - PGN vs. Chessbase. Of great general interest, Roman (who is a 2200-rated master) shares his thoughts on what it takes to reach that level in Becoming a chess master. Inspired by a tournament that went well for him, How to prepare for a Chess Tournament. Finally, what he called "Soviet chess school ideas in the computer era": 10 tips for Analysing your Chess Games. 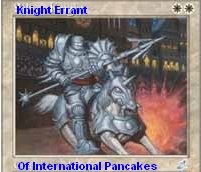 a blogger originally of the "Knights de la Maza" School, has been doing this stuff for seven years now, and recommended for our edification What dela Maza forgot to tell us. I would urge you to read this concise post very carefully and think about it.  He says "The reason I like this post is that it is a final conclusion after 7 years of investigation." For a bit more on the background and history of the "Knights (de la Maza) Errant" that have been such a big part of the chess blogging scene he gave us a post of  Don Q that shows with humor where the "Don. Q" part comes in. Don Q. became a middle-school math teacher but I know somewhere in his heart the Quest still calls, if faintly...


ChessAdmin of Path to Chess Mastery has only been blogging since July 2011 but already has put up many well-written and thoughtful pieces. When he wrote a post considering his "Best of" he chose for a game his win ("many years ago") from the Denker Tournament of State High School Champions, for his "best," Setting the Scene (a very fine explanation of what he's trying to do with his chess blogging ) and for a "Best EVAH" in the greater chess blogosphere the "largest pseudo-flame war ever on chess improvement blogs": Shy Guest Blogger (from Elizabeth Vicary's blog). Yes, I was THERE for that slugfest and it was fun.

Visit ChessAdmin's site very week, it is always well worth your time. 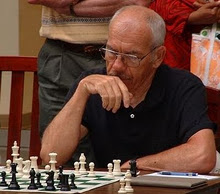 Ralph of Lost in Chessland submitted his "best game or best move" and there is all kinds of fascinating detail here. For one thing he beats a player rated almost 400 points higher. For another he uses the "Balogh counter-gambit with colors reversed." I don't know if I would try it but isn't the very name awesome? Finally, he wins with a beautiful interference move. See if you can spot the opponent's saving move 24.

Michael Goeller of The Kenilworthian 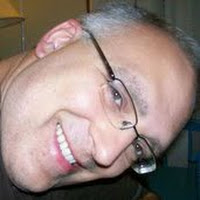 has produced many, many great posts over the years and he suggested a few for inclusion here: Chess and Evolutionary Theory is an interesting essay exploring the concept--I remember commenting on it at the time. I posted some of his opening essays and compilations in Best of Part I, but he has so much quality blogging that you need to check his work out in detail. See his "Best of..." on the right side bar at The Kenilworthian. For another thoughtful essay, see his Chess and Self-Control.

Signalman pointed us to some great books that are avialable FREE on the web including Chess Fundamentals by Capablanca and Chess History and Reminiscences by H. E. Bird. Among his blog posts he includes are A drawing move? How come I lost? and Do you have an Opening for me? Since we don't seem to have a photo of Signalman we will have to do something different:
﻿﻿﻿﻿﻿﻿
﻿﻿﻿﻿﻿﻿


Liquid Egg Product notes that "Chessloser would be on here if he hadn't taken down his blog." Well, fortune favors the prepared, my friend. Back around New Year's 2009 chessloser (who did not normally use CAPS in his writings) retired/disappeared from the blog scene. I can happily report, however, that he is spotted from time to time on FICS. I did link to a few chessloser gems, all of which are here on the RLP chessloser page. A few things the [G]reat chessloser wrote deserve their very own quote in "Best of," because in many ways he was THE BEST:

The Coruscating Brilliance of Chessloser, Again:

yesterday i became a real chessman. yesterday, the postman delivered the one thing that makes me a bona fide chessplayer. yesterday, i got my chessclock. that’s like a surfer getting his surfboard, or a postal worker getting his high powered rifle with the scope. anyone can play chess, but only those who are commited (or should be, ha ha) have a chess clock. it is black and sleek, hand crafted out of only the finest in cheap plastic, lovingly and carefully assembled by the skilled artisinal hands of cheap chinese labor. that’s right, just like a lambourghini or fine wine, i have an IMPORT. i have an IMPORTED chess clock. how classy is that?

Just a little more for here, but really, REALLY do go and read all the chessloser posts I was fortunate enough to preserve...

the only difference, really, between him and me is, he knew what he was doing, he calculated and analized and had a plan, and he won the majority of his games, where as i have the wreckless sacrificing down pat, the bravado, but i don’t back any of it up with sound play or a halfway decent plan, i often fail to see the consequences of my moves, and then i lose miserably. but, every once in a while, i catch someone on a bad day, and it works out for me, like in this game here.

UPDATE 3.7.12: In the comments ChessAdmin points out that chessloser is available via the WayBack Machine. Thank goodness; I went and read some more and the man is/was/hopefully-will-be a genius of a writer. Also, I have discovered this photo, which The Government had tried to suppress for National Security reasons: 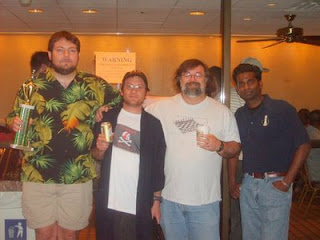 L-R: Likesforests (The Endgame Tactician), chessloser, Blunderprone and Ivan W (Getting to 2000) at the World Open, Philadelphia 2008. Wow.

Okay, we're only half way through the material and I think that's dense enough for now. A whole bunch more "Best of!" stuff will be coming soon. For now, Happy Trails.

Posted by Robert Pearson at 9:48 PM

Great that you bring up chessloser's blog. Luckily, zombies do exist:

It may be the living dead, but it's still the most entertaining chess blog.

More pictures from the 2008 World open. Including ChessLoser's pre-White Russian Round.

Awesome! Did Elizabeth Vicary have a White Russian too? Or was that just the Big Lebowski?

Thanks for sharing all this interesting stuff. I have a blog on chess improvement myself and would be very happy to share links: http://patzer2master.blogspot.com/

got your message on FICS.

thank you Robert, and everyone else, for the super kind words. sometimes i miss the whole chess scene. i do miss you guys and i often miss chess blogging. hope you are all kicking ass.

some guy who used to be known as chessloser

some guy who used to be known as chessloser,

Great to hear from you.

My FICS handle is ivanw