I've had the pleasure of playing a few serious training games on FICS with ChessAdmin recently and we agreed that annotating the most recent one might be fun and instructive for both of us. Hopefully, it has some value for the rest of the chess world, as well. Okay, for the .001 of 1% of the chess world who frequent our blogs.

ChessAdmin has posted his analysis at Annotated Game #15: Blogger Throwdown (RLP). While we seem to have pointed out many of the same moves and lines, there are some interesting differences, too. It's a game worth examining and I invite you to check out his comments. (Editor--it might be helpful for folks to know that the time control is 60 5. Thanks, Ed.)

ChessAdmin is a player of about equal strength to me (somewhere in USCF Class B) so the games have been pretty closely fought. I've managed a plus score but but mainly I've enjoyed the stimulating chess and the friendly atmosphere. The game from last Saturday was a good battle and featured a fighting middle game where I obtained some advantage, and a queen ending that could have been almost unbearably complex. You'll see the mind bending variations and the surprising finish below...

This was our third game and knowing I was scheduled for black I gave some thought to the opening, since he has written some very good posts about his repertoire and how he approaches it. I expected 1. c4 and for much of my career played the King's Indian Defense against it, with 1. ..e5 being my other main choice. Lately I've been employing the Tarrasch Defense against the English, and in our first game that had led to a nice win for me. But since he had written about the kingside v. queenside "race" in the Reversed Sicilian recently I thought I might go back to that scenario, fun for and practice.

I did it through a rather cagey order of moves, and instead of putting all my verbiage in the small print of the annotations below I give the first eight moves here, with comments:

What Do You See? 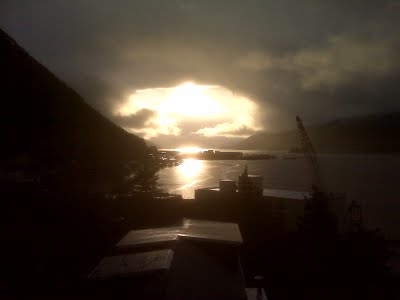 ﻿I took this photo a few years ago from my office window. It is posted for no reason other than enjoyment.

Brain Folds and Memory: Any Relation to Chess Ability?

A common structural variation in the brain may explain why some people are better able to remember details of past events and to distinguish real events from those they were told about or may have imagined, scientists report.

I was blessed with a very good memory, including abilities like being able to read a book or see a movie and then give an accurate scene-by-scene description of it. I am only a moderately strong chess player but that may be because I didn't play seriously until I was an adult.

It would be intriguing to see if there is any correlation between this brain fold and, say, being a Grandmaster. I'd bet that GMs all have the fold, but that's just a guess. "Chess memory" seems to be somewhat correlated with good general memory in my experience, but correlation is not causation. People that really love chess and play a lot as youngsters usually can perfectly remember entire games a lot better than people like me. But I'm not convinced that they would be able to read a 20-page article on the Battle of Yorktown and summarize it more accurately a week later .

Anyway, I hope some brain researcher will take a look at this in relation to chess ability. It might be very interesting, especially if it turns out my speculation that strong players are more "folded" is wrong.

At Mark Week's excellent Chess for All Ages. Great stuff, and a lot of it. I especially recommend ChessAdmin's Path to Chess Mastery blog, by the way. He has many well-crafted and interesting posts, but only two at a time are on the front page so don't forget to hit the "older posts" button.

Thanks, as always, to Blue Devil Knight who has kept this Carnival going.