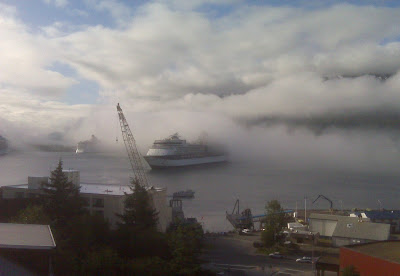 I've been working on a chess post, I really have, but it's not ready, and so today I simply present two images. Above, a photo of Juneau, Alaska I shot the other day.

Below, a photo of Elizabeth Vicary that she shot the other day. She, like me, feels the urge to write about things other than chess from time to time. Thus this post. 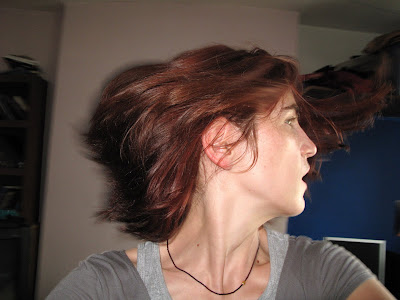 I had defeated several USCF Class A players by the spring of 1987 and raised my rating to the low 1700s, but no Experts had fallen to my bad kung fu until this game. This was the same year my opponent won the Nevada State Championship, and even now Barry is still competing at the Reno Chess Club!

Admittedly, he plays the opening in "coffee house" style and I just take advantage, but I'm proud of my play. After I obtained a winning position I did make a couple of (?!) moves but fortunately they merely prolonged the game slightly.

Hi Robert, Good game as you deserved the win with your preparation. I'd have played out the game if I knew this would become your blog. I'd like to make a few corrections. No, I hadn't been drinking or something else. Also I had been a Master for two years at the time of the game. I do remember the disgust and frustration when I realized I had blundered away a pawn. I don't see the mate coming within ten moves as you stated. I saw a very difficult position and would probably drop the c-pawn too with your pressure. So leaving a mate on the board was my frustrated way of resigning. In hindsight I should have played on as now I have the experience of saving such games. Well done, hope you get the chance to beat another Master.

First, my sincere apologies to Bill for saying "[he] looked kind of distraught, or perhaps had been drinking or something...anyway, he didn't look happy to be there." I take his word that nothing unusual was going on except just one of those "moments" we've all experienced in chess.

Second, apologies for the inaccuracy on his achieving the USCF Master rating--I was going from memory there, as the USCF online records only go back to 1991.

When I said "I guess I was subconsciously giving him a chance to resign instead of getting mated inside of 10 moves, and he did" I was talking the position on the board after Bill's "resigning" by allowing mate. I think he's right, he should have played on; as I noted in the original post (you have to look at the ChessFlash game annotations there) White scored 46.5-4.5 from the position in the database, but Bill was and is a stronger player overall, and Black did manage two wins and a few draws after going down the pawn.

Thanks for commenting Bill, and again, apologies for the inaccuracies in my original account.