We Now Return to Our Regularly Scheduled Programming

Okay, after two consecutive non-chess posts I feel compelled to do something on chess here at my, ummm, CHESS BLOG. If you'd like to read something non-chessy wherein I take on a couple of nattering nabobs of negativism, click this:

"I think both writers of the above wail need Paxil, or perhaps a revolver, a cartridge and some courage."

Oh yes, back to CHESS. Here is a very interesting page on the Logical Chess site with the best games of "readers like you." I think that means us non-masters. Anyway, I was struck by the nice game replayer--I don't know how they did it but it's very clean. Personally, I just signed up to Glenn Wilson's Chess Flash, and someday I'll actually post some games with it. You should try it--or, if you just have a game you'd like to publish, send it to me in .pgn or just drop the moves into the comments and maybe it will give me the motivation to start working with the thing and get this chess blog hot again. Perhaps I'll become the hub for good amateur games and all the cool people will start to hang out here. 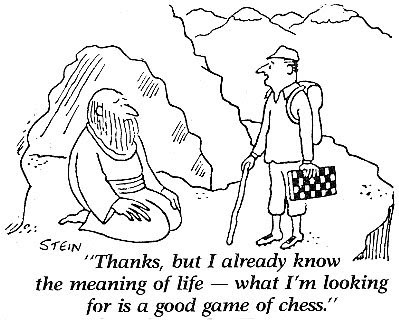 Posted by Robert Pearson at 10:06 AM 3 comments

Since I'm not so uptight about chess and my rating anymore, I've been experimenting over at FICS with various openings while playing blitz; yes, blitz, the most pernicious, degrading, scandalous, dangerous form of chess there is.

I used to stick mostly to my tournament opening repertoire, even when playing fast chess. Now that I'm not so focused on improvement, but on play, in the last week or so I've trotted out a lot of stuff like the Danish Gambit, 1. Nc3, 1. f4, and as Black 1. ... Nc3, the Modern/Pirc and so on. I still play my main lines from time to time, as well.

The result has been a gain of 50-60 rating points in blitz. There seems to be more flexibility and daring in my play now. It's fresher.

We'll see how this works in the Tournament of the LEPers (II) at G/15 + 30s, but opponents be warned; anything could happen.

Back in Business, and Ain't It Grand

I played a few blitz games last night on FICS and felt like a rusty nail in an acid bath, won one or two and dropped a bunch. That's okay, I think the break has made me Hunger for chess, and blogging, again.

Chessloser hit Vegas, castled long (0-0-0) in the last three rounds after starting 3-0, and he's feeling a little down about it. As who wouldn't? A natural, healthy reaction. In the comments, I advise a break. We ALL need a break, from time to time. Things go in cycles, including the Sun; it would be really, really HIlarious if it turned out that increasing carbon dioxide levels were the only thing between us and the next Ice Age. (h/t Instapundit)

To everything, there is a season.

I'm playing in the Tournament of the LEPers II starting in a week or so, I feel like I'm having fun again with chess, after swearing off the five-hour grind. It's amazing how rusty I've gotten after just a few weeks with no tactics work, no games and no studying of any kind, but I'm also not all wound up with the wins and losses and rating points. I could lose all the games in the LEPers event and I'll be all right. Amazing.

I've postponed my LSAT, mentioned in the previous post, until October. After a lot of research and practice, I've decided I'm going to spend another 150 hours of prep. Unlike chess, this is a game that seems to work in a roughly linear fashion, time spent studying to final score. Not true when you get to the very right edge of the bell curve, but close enough to make it worthwhile. Maybe I'll get a great score and go to some really stuffy law school back East and become a wealthy shark in a three piece suit--or maybe I'll just stay where I am for the next twenty years and have a great life. Law school, I can take it or leave it, like chess.

I'll get back to posting games soon--in addition to some mildly interesting stuff from the final stage of my five-hour grind career, I've got some older contests that might amuse, and even instruct. I'm going to start using the excellent Glenn Wilson's ChessFlash.