As promised, a report on last night's tournament game. I defeated L. O'Doan (1668) and am at 2.5-2.5 with one round to go in the Reno CC Class B Ch. A win or draw in the final round against A. Mann, who I defeated the first time around, will ensure second place for me.

I haven't time right now to do justice to annotating the game, but briefly, as black in a King's Indian I felt pretty comfortable with his Petrosian Variation, and when he let me push a pawn to f4 I had a nice bind on the kingside, and was able to play on both sides of the board. He was definitely on defense. Around move 20 I played what I thought was a killer combination winning at least a pawn--but he found a move I'd overlooked, moving his Queen back to the square it had just left. I was lucky in a way, finding a sequence that kept material in balance, and a few moves later won the exchange with a continuing bind. I just was careful to look for any tricks after that, until I mated him on move 42.

I'm pleased overall with the game, and the fact that I managed my clock as planned--30 minutes left for the last 10 moves, and four minutes for the last move before the control; but I'm usually going to have to play better than this (overlooked tactic) to hang with the A players and above. It's not that O'Doan isn't a good player. Once above 1900, he's still a good fighter who doesn't go down easily. But I doubt that an A player or above would have let me get such a bind on the position.

Next time: Catching up with some game scores, but first The Sage in the Tower has listed his Favorite 11 Chess Books, and I'm going to consider that, and share my choices with you.

I have black vs. Laroy O'Doan; our previous game was an exciting draw. I mentioned in my last post "what's working and what isn't," and what I had in mind that isn't is that in both the draw against O'Doan and my loss to S. Kesti last week I blew a couple of possible half points by getting into time pressure and playing rather weakly, or at least shallowly, for the last few moves before the control.

The Reno CC plays a lot of 30/90, G/60 time controls, which is certainly long enough for quality chess. In both the cited games I took 15-20 minutes on two separate occasions in relatively complicated tactical positions, but both times I could have played the move I actually chose much sooner. In both I had to play quickly for 8-10 moves to make the time control at move 30.

The fact is, I'm not especially good in time pressure, and zeitnot by my standards is around one minute per move. So one specific thing I will keep in mind tonight is not to re-re-recheck my calculations except in extraordinary circumstances. With fairly quick opening play, I want to have at least a half-hour left at move 20.

I'll let you know how it went in my next post.

That I did lose the game Thursday, so S. Kesti clinches the Reno CC Class B championship for this year. Two more games to go, and a couple of wins will clinch second and continue to raise my rating, so there is plenty to play for. More reflections on what I'm doing, what's working and what isn't, to come soon.

I'll be playing Steve Kesti, top-rated player in the Reno CC Class B Ch. and in first place after the first cylce with 3-0. I'm second with 1.5-1.5. So I'll need to beat him to have any chance of winning the tournament.

I've been working with the Chess Tactics Server pretty regularly (about 470 problems in three weeks) and we'll see if if it has any effect. I'm still working out the best training methods for me and my life and time constraints, but I've had the advantage going into the middlegame in almost every game I've played since my comeback began in December. I just have to be a good finisher and I'll be on my way!

Of course, being a good finisher is the hardest thing in chess.

So, onward with enthusiasm to the second cycle!

By the way, fellow blogger and Reno CC A-player E. Shoemaker played his third consecutive draw in the A section this weekend, according to reports. See The Sage in the Tower to follow his quest for chess perfection.

I drew a very exciting game with Laroy O'Doan ( 1668) last night; as White in a Nimzo-Indian I threw the kitchen sink at him and in a combination-rich battle he got me in a perpetual after I won a piece. I'm sure there were wins in there for me--maybe for him, too!

There is some interesting history behind this game. O'Doan was the first A-player I ever beat, back around 1981, when he was rated 1900 and I was 1498 or something like that. I'll have to find the score in my archives, but I never forgot the thrill of beating a good player for the first time. That was a Nimzo-Indian too, but with me on the Black side.

Now Laroy is back in Class B, and so am I. He recently gained 68 points in the January Swiss by scoring 3 of 4, though, to get up off the rating floor.

I'll post the game eventually, or get it put up on the Reno CC archive.

Posted by Robert Pearson at 11:53 AM 0 comments

I put up a link on the sidebar to the 2006 U.S. Chess Championship website. It's very well done, probably because Mig is in charge. Results, news, personal stories, annotated games, FREE! I've been exploring the chess web lately and it's incredible how much great content there is now, free for the clicking on. What a great time to be into chess! 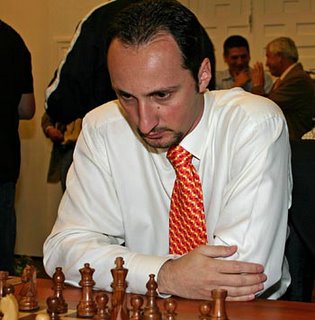 This is what I was talking about! Vaselin Topalov, a half point out of last place after the first cycle of the Morelia-Linares Tournament, has won three straight to get into a tie for second, one point back of leader Peter Leko. Only the mentally strong are able to pull off this sort of comeback.

Interestingly, this is shaping up to be a replay of Santa Monica 1966, a tournament of similar strength and format, when Bobby Fischer suffered three straight losses at the end of the first cycle, only to come back with an amazing series of wins and pull within a half point of Boris Spassky at the end.

I'm just zero for one so far at the Reno CC Class B Ch., but there's no reason to wait until it gets any worse before starting my comeback! 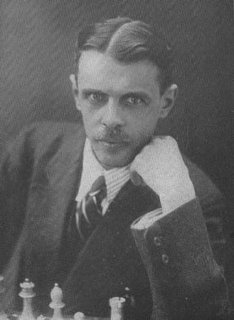 Roger Paige's Chess Site. He has many wonderful tournament photos, and here's one of my favorite authors, Eugene Znosko-Borovsky.

My current tournament is a 4-player double round robin for the Reno Chess Club Class B Championship. I was the Class C Champ back in 1980 before I moved to Alaska--they've still got the trophy with my name on it at the club.

But back to the reality of Present Time. I lost last night with Black to S. Kesti, who is the highest rated of the four competitors at 1703. I won a clear exchange right out of the opening, but he attacked hard, I got too tied up and didn't break out when I had the chance, and he smashed through. A good lesson to remember; give back material when necessary to get counterplay!

I had very little time to annotate this so I hope any passersby will point out the mistakes:

UPDATE: The game is posted on the Reno Chess Club site. Click on Game Archive and scroll down to the bottom of the list.

Black to Move
From Kernighan - Tomkovich, Rd. 4 of the Kenilworth CC Championship. Black, a B-player, can beat a Master if he finds the shot (and the follow-up).

From the great Kenilworthian blog. I'll admit I didn't find it, but I learned something through my failure.

Don't look at the annotated game here until you know the answer!