There is No Substitute for Victory

Per my friend (whom I do not personally know) Mencius Moldbug:

Therefore, in many cases peace can be achieved only in the Roman way: by victory. As with all military objectives, victory is achieved by any means necessary. Including artillery. Clearly, if the enemy uses artillery and you don't, your chances of victory are greatly reduced.

Carve this on your forehead:  The only reason for a Decline and Fall, of an empire or a chess player, is erosion of the Will.

The Kinks also knew--there was no substitute for Victoria.


Excerpt:
THE STRENGTH CURVE
In his book Extreme Fear, Jeff Wise discusses the effect of the brain’s reaction to stimuli on strength and athletic performance.
Wise cites the research by Vladimir Zatsiorsky on three different types of strength--Absolute, Maximal and Competitive Maximum.
Absolute Strength is the total mechanical strength of a person, the force a person should be able to apply.
According to Zatsiorsky’s research humans can rarely apply all that force.  A novice weight lifter can apply 65%, an experience athlete can apply 80%.  This lesser number is called Maximal Strength.
But, in competitive situations Maximal Strength can be increased by as much as 12%--hence the term Competitive Maximum.
(...)
If the pressure of competition is too much, the arousal goes to far along the curve and performance decreases.  But if a person is at or near the top of the curve, they can approach the force of Absolute Strength.
In an earlier ACIS of Caissa post I wrote:
Have you ever been kibbitzing a game and seen good moves that the players (sometimes much higher-rated than you) missed? Have you ever played a move in a (non-blitz) game and instantly seen, as soon as you took your hand off the piece, that it was a blunder? Have you ever seen a Grandmaster blunder? (if not, see my "Homer Nods" series). I'll wager a bundle you answered "Yes, yes and yes."

Have you ever asked yourself how these things are possible?
Yes:  TOO MUCH AROUSAL.

I also see a connection here with GM Belyavsky, who in his book Uncompromising Chess states that he could only analyze a position at maximum strength during tournament games.  While some people seem to analyze quite well at home, I too have always felt that personally I don't really hit my peak except under competitive conditions.  When there is JUST RIGHT AROUSAL, anyway.

If something feels notably easy to decipher, whether it’s a piece of text or the shape of an object or the particulars of a person’s face, there’s a good chance it’s because we’ve previously done the work of processing it, and that it’s something we’ve encountered before. Cognitive fluency signals familiarity - some psychologists argue that the eerie experience of déjà vu is simply when we’re fooled by the unexpected ease of taking in a piece of sensory information, and interpret that as a memory of having been there or seen it before.
An instinctive preference for the familiar made sense in the prehistoric environment in which our brains developed, psychologists hypothesize. Unfamiliar things - whether they were large woolly animals, plants we were thinking of eating, or fellow human beings - needed to be carefully evaluated to determine whether they were friend or foe. Familiar objects were those we’d already passed judgment on, so it made sense not to waste time and energy scrutinizing them.

This absolutely applies to chess positions and the choices we make about positions to aim for. I think most players like to get a "familiar" advantage in an opening they recognize rather than a somewhat bigger advantage in a strange setting.  Going back a bit to my first post about whether amateur players care much about today's grandmaster games and tournaments, it occurred to me that perhaps the reason I didn't like this position as given by IM Mark Ginsburg (...) 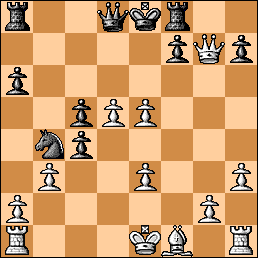 
(...) is because it seems so random, outside of my usual experience, so messy and dangerous.
All that old Botvinnik advice about studying openings not to memorize (oh, no), but to become familiar with "typical middlegames" makes sense in light of this perspective, no?  But it could also benefit your chess strength by "breaking out" and deliberately playing into the unfamiliar, the messy, even the dangerous from time to time.

Chess Amateurs, Chess Pros, When and If the Twain Shall Meet

Mark Weeks of Chess for All Ages kindly posts a thoughtful and extended answer, Do You Care About Today's GMs? to my previous post on this question.  In the comments to Mark's post Michael Goeller, the most excellent Kenilworthian recalls his take on the question, Chess Amateurism, from a couple of years ago.

Mark also makes a point in his post about the openings being "exhausted" at some point in the next 10-20 years. He is becoming more and more interested in chess960 as a result.  I figure that even when chess (not just the opening) is "solved" in the way checkers is now solved, there will still be plenty of space for fallible humans to enjoy playing each other.  Whether there will still be a demand for grandmasters to get paid to play each other at that time is another matter.

I really appreciated the many cogent comments to that post, but especially this one:

Hardly knowing anything of chess, I hardly know of any of today's GMs, much less their games.
I am, as in most things, interested in the antiquated.
That's Aaron DeWeese, and you may want to take a look at his his fascinating Nether Letter Log.  I'm with Aaron, love me some antiquated chess; probably, I'll still be saying that when they download my whole brain content into a hard drive and send it on a trip to the stars in a self-replicating space exploration machine.  Of course, the Really Big Database will be available for review, and it'll be something like the Star Trek TNG Holodeck.  I'll spend part of the time playing a match with the Ghost (in the machine) of Tarrasch.  Neither of us will have computer assistance.

Remember, the purpose of philosophy is to screw the inscrutable (or, alternatively, to eff the ineffable).

For a change today, let's NOT ROCK, let's be COOL: