My friend dk asks in the comments to my previous post:

robert, can you tell us, at a seperate post, about you, what your chess is like, what challenges you face in chess, what you overcame, or must overcome, what you long for, what you avoid, what, in short, what YOUR PROCESS IS, as distinct from theory, or blogging, or openings, or endings, etc.

Well okay, dk, I'm willing to share some information on a more personal level, and I'm going to use Blue Devil Knight's excellent questionnaire as a vehicle. I'm tempted to tag you to do it too, but a man in the midst of writing a 15-part epic on chess bloggers has enough to do, and you've never been short on self-revelation at your blog, anyhow.

So, here goes:
1. How long have you been playing chess? Have you played it consistently since you started, or were there lulls in your play? How did these lulls affect your performance?

I was aware of chess as a young child as I saw it in movies, books and at school, but no one in my family played at all, so I taught myself when I got really interested after seeing the PBS coverage of Fischer-Spassky in 1972. I was just shy of my 12th birthday. I used the book Chess in 30 Minutes, which I found at the school library. I played around with friends and at school, but I didn't get serious until I was 20. I'd been playing a lot with a friend who was about as good as me, and I looked up the Reno Chess Club and we went by one evening. He said he didn't really dig the atmosphere (too many "old men" who were "too serious") but I liked it and started playing regularly at the club. Within a few months I was beating up on my friend and he didn't want to play me anymore, but of course the club was another story--my first tournament happened to be the Club Championship, a 15-player round robin, and I managed one draw, against William Barr, an older gentleman rated around 1550. We chess players have fantastic memories for certain things, no doubt. My first rating, due to that draw, was 1198, and I played pretty steadily until I moved to Alaska in 1987, by which time I was around 1750. There were a few pretty decent players in the town I lived in up there, and I reached a peak rating of about 1825 around the end of 1989, but after that the competition and my playing time both fell off, and I went through several periods of inactivity of a year or more between 1991 and 2004. Each time, I would come back and suffer some ratings losses--you can see some of the details here. So at the moment I'm at my "floor" of 1600. But I'm playing fairly regularly against good competition for the foreseeable future, and I'm working as hard as time allows to get back to my glorious, if short-lived, days as an "A-player."

2. Aside from playing games, what is your primary mode of training?

Over the years my methods have evolved--early in my career I didn't really study consistently, just played a lot, which was enough to make quite a bit of progress. I worked out a decent opening repertoire, at least as White, from a couple of books after my first year of serious play. Nowadays I work on tactics exercises when I can, but not as often as I'd like to, and I've gotten much better and more consistent at reviewing my own games and trying to understand my weak points. I should have been doing that for a lot longer, but I'll admit that for many years I didn't spend much time on my games--I'd just play another. I have come to believe that tactical training and studying your typical mistakes are the two most important areas on which to spend your training time. I play over a well-annotated master game occasionally, which I enjoy and learn from, and I wish I had more time for that.

3. What is the single most helpful method of improvement that you have ever used?

Getting beaten by stronger players. My first few years at the club I was privileged to play and lose hundreds of quick games against guys rated 300-500 points higher. I think that taught me and motivated me to get better more than anything else. I had a lot more time available for chess then, which also made a difference.

It's funny how a lot of the respondents to this questionnaire over at BCC have dodged this, not wanting to give their future opponents any clues--but I totally understand! I'll give up this much: I've played various closed games most of my career, usually with 1. d4, and it's still my favorite, but lately I've pulled out 1. e4 a few times, with mixed results. With black I've tried a lot of different lines against 1. e4, but it seems like the most fun I've had is with the Pirc/Modern, though Grandmasters have their doubts about that--luckily, I'm not playing any of them. Against 1. d4 I've played the King's Indian most of my career, and it's almost always a slugfest when I get to play it, which I enjoy.

5. Who is your favorite chess player and why?

Paul Keres. His games are superb, his books are wonderfully written and beautifully annotated, and I've always felt a lot of empathy for him, the man from a tiny Baltic country that was swallowed up by the Soviet machine.

6. What is your favorite chess book?

Grandmaster of Chess by Paul Keres. 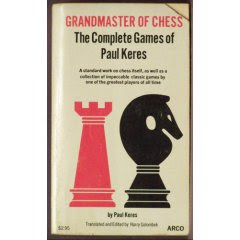 Tal's book on his 1960 Match with Botvinnik is a close second.

7. What book would you recommend for a friend who knows only the rules of chess?

Logical Chess, Move by Move by Chernev. John Nunn gets down hard on it in his Grandmaster Chess, Move by Move, but for a beginner I think it instills a consistent, systematic approach that's more important than whatever defects the book possesses.

8. Do you play in in-person tournaments? What is your favorite tournament experience?

I like playing against a human sitting across a board far more than any other form of chess, though I do enjoy playing on the Internet sometimes. My favorite tournament experience is playing every Thursday at the local club, even though I'm often pretty tired because of my schedule. I'm really, really looking forward to the Western States Open in Reno this October--three solid days of tough tournament chess.

9. Please give us a link to what you consider your best two blog posts (on your own blog).

I gather some thoughts on chess improvement, and come out with my own boring, balanced approach--Weaving the Disparate Threads.

Ron Thacker, Where are You?, about one of the more interesting chess personalities I've met.

10. What proportion of total chess time should be spent studying openings for someone at your level?

At my level, 25-30 percent, at most. I find it intriguing that one of the top chess bloggers, rated expert Michael Goeller of the Kenilworthian, says he spends about 90 percent of the time on openings, because that's what he enjoys. Someone who's not focused like laser on just raising his rating! Someone doing what he enjoys, instead of eating his vegetables and 100 tactical problems per day!

Maybe Michael knows something the rest of us need to be reminded of--we are alive to experience joy, and we play chess to enjoy. If we're sane, anyway.

Posted by Robert Pearson at 9:26 PM

ahhh, another facet of the diamond that is robert pearson has been illuminated...cool stuff....

PS yes, as i recently added a parenthetic comment to the top of my most recent post, in bright red, no one tags me to mid-August at the soonest, i can be last, if no one forgets me. :)

im burried. in addition to analysis of hundreds of my own recent 430 or so games, and renewed study of the old classics in volume, again, and much or not inextensive blogging,

i am data mining securities markets again, and must rebuild my AI model (the sustained work of seventeen years) in stock markets, combining momentum and sentiment, weighted... so, yes, enough to occupy me?

then mountaineering training starts in a few weeks for my annual glacial climb.

thank you for your keen sensativity and good sense on this point.